Fifty-five-thousand Ontario education workers are picketing today, protesting the legislation that forces a new contract on them.

The largest picket line in our region is in Timmins, outside the constituency office of George Pirie, the only Conservative Party MPP in these parts.

CUPE Local 88-88 president Rick Racicot says that’s all his membership can do, with the invocation of the notwithstanding clause prohibiting a court challenge.

“That’s what they want, that we can’t challenge it,” he comments. “But I know from CUPE National that they will be challenging it and they are going to court with it, so for however long it takes for that, we will stay out for that time.”

“Today is the protest with George Pirie. We have pickets at Service Ontario in Iroquois Falls, town hall in Kap, all the little towns have a protest in front of their government buildings, more or less.”

Education minister Stephen Lecce refers to today’s action as an illegal strike. He adds that the government has filed a submission to the Ontario Labour Relations Board, and will use any tool available to get students back into the classroom. 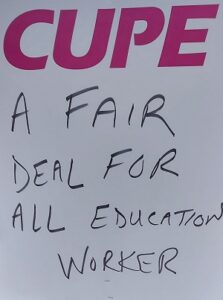