Fundraising and marketing are being touted as a way to keep the Cochrane Polar Bear Habitat from closing.

That argument was made Tuesday night, when Heather Brouwer (BROW-ur) of the group People for the Polar Bear Habitat addressed town council.

She says that since it formed on November 7th, the group has attracted almost 3,000 letters of support from Cochrane and far-flung places around the world. 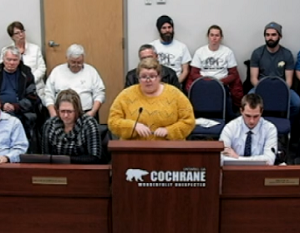 Among that support is $18,000 in a Go Fund Me campaign.  Brouwer calls off the support “overwhelming”.

“It has reinforced for our group that the support for the Habitat is real and that the mission of the Habitat is something to be proud of,” she told Mayor Denis Clement and his councillors. “We are thankful to everyone in Cochrane and around the world who has joined together to support the cause, and we hope that their voices matter to you as much as they matter to us.”

Two other delegations wanted to address council on the Habitat, but didn’t meet its procedural bylaw conditions.