Hundreds of people turned out for the two open houses on Wednesday, to voice support for or against keeping the Cochrane Polar Bear Habitat open.

Cochrane town councillor Rodney Hoogenhoud told the crowd at the afternoon session that he’s hopeful a way can be found to save the Habitat.

He says more information is needed, and council is eager to provide as much to the public as possible.  Of primary concern is the balance of fiscal benefits against the Habitat’s $400,000 annual deficit.

Retired plumber Edward Karockai  said the municipality needs to think of the Habitat as a business, and run it accordingly.  Worry less about the money the Habitat is losing, he says, and more about how to improve the facility so it does better, just as he did with his business.

“It’s just not always about money,” he expressed.  “I’ve ben in business for 45 years and I didn’t survive worrying about my next dollar.  I spent my money buying new equipment and going forward.” 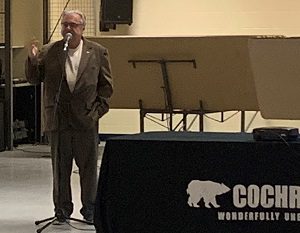 Karockai went on to remind the audience that councillors serve only a four year term, and may find themselves unemployed should they go ahead with the closure.

Mayor Denis Clement says council’s final decision will be made by Dec. 10.