Ardis Proulx Chedore shows off the Walking Scrabble trophies, made on the Cochrane Public Library's 3D printer, and the bins containing letters and Cree symbols to use to spell words. (Bob McIntyre, MyKapuskasingNow.com staff)

Look out, Trivial Pursuit.  A game devised in Cochrane could very well knock you off your pedestal of best Canadian game ever.

It’s played outdoors, at the arena, or even in the library.  Players walk for about an hour. Every time they pass Chedore, they pick a letter.

“And then at the end of the hour, you’re trying to spell as many words as you can,” she explains. “Whatever tiles you have left, you have to subtract them from your score, just like regular Scrabble.  But we also have bonus words.  So you can try to spell these bonus words to get extra points.  That’s where the competition starts to get a little hairy.” 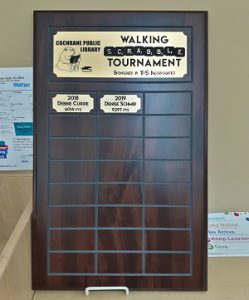 It’s been played for the past couple of years, and Chedore says it’s not quite as strict as the board game.

“We accept abbreviations, proper names.  The idea is to be physically active and then also keeping your mind active, so we’re not as strict as they are with the game of Scrabble.”

The person with the most points at the end of the year gets a trophy and their name engraved on a plaque.