The question of the day is whether your travel plans into or out of Timmins M. Power Airport might be affected by an outside workers strike starting tomorrow (Fri., March 1).  We get the answer from Martin Mika, regional vice-president of the Union of Canadian Transportation Employees: “No. Next week? – We’re not sure.”

The 19 workers who clear snow off runways among other tasks, voted yesterday to take strike action.  Their leadership decided today not to take that step, at least for now.

“No one is happy that negotiations have led us to this breaking point,” according to Mika, “but the city has put us in a position where we either accept a cut or we go on strike.”

The City of Timmins operates the airport, so it’s the employer.

Mika says the strike vote means his membership is serious about wanting a fair contract.

The latest city offer is a 1.5% raise and concessions on benefits.  The union says that amounts to a pay reduction.

Mika  is calling on Mayor George Pirie and city administration to send its negotiating team back to the bargaining table.

“We are not here to inconvenience the public. I want to make that perfectly clear,” Mika states.  “We will give the employer 72 hours notice if a strike is going to be called.”

Mika says a strike would be tough on the community, his members and their families.  He says they would love nothing better than a fair deal, which is up to the city.

“We’re waiting for a phone call.” 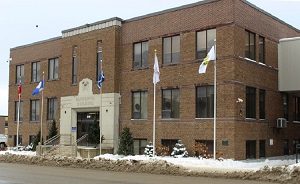 Thursday afternoon, Dave Landers said the city only learned the result of the strike vote via social media. and is willing to go back to negotiating.

“From the city’s point of view,’ he tells My Kapuskasing Now Dot Com, “I don’t believe that we’re at a bargaining impasse.  We can see that we’ll get back to the table and hopefully hash this thing out together.”

Landers won’t discuss details of the city’s contract offer… other than to say there’s nothing in it that other unions haven’t accepted in bargaining with the city.

”Everybody’s aware of the financial position that the city’s in and the heavy tax burden on the homeowners,” he points out.  “We’ve got to strike a balance between where we can go in collective bargainings to fairly treat our employees and also what the tax base can bear.”

Should a strike occur Landers says a “continuation plan” will prioritize the work required, and non-union staff will do it.  He is confident that the airport will keep operating safely.